Amazing Kendall Jenner on cover of Vogue Australia Magazine June Issue 2019. In the gallery were added outtakes and magazine scans from this photoshoot. Enjoy!

Kendall Jenner was 14 years old when she decided she wanted to become a model. Actually, she’d been mulling it over since the age of seven, but it wasn’t until her teens that she decided to take action. Jenner did what any enthusiastic teenager with some paper, a colour printer and stapler would do – she compiled a homemade booklet of DIY snapshots (giving it the title Kendall Jenner Modelling Photos) and presented it to her parents. Most mums would have taken one look and put it out with the recycling, but Jenner’s mum – the ultimate ‘momager’ Kris Jenner – took her second youngest daughter seriously, telling the audience of their hit reality TV show Keeping Up With The Kardashians: “If this is what Kendall really wants to do then I’m on board and I’ll get the word out.”

Speaking to Vogue Australia, Jenner, now 23, reveals that modelling was – and still is – her end goal. When asked if she had a fall-back plan, she is polite but matter of fact. “No. And I don’t think I necessarily needed to have one. Anything I do, I always want to be 100 per cent in it and know I want to be doing it. When I started I was so young, so if it didn’t work out then I was going to figure it out. I’d cross that bridge when I got there.”

As we know, Jenner never did have to pull out a career pivot. In the five-and-a-half years since she made her runway debut for Marc Jacobs autumn/winter ’14/’15 in a sheer long-sleeved top and razor-sharp wig teamed with bleached eyebrows, she has walked for Chanel, Givenchy and Balmain, fronted campaigns for Calvin Klein and Estée Lauder, and amassed a following of 107 million on Instagram (more than four times Australia’s population). In 2017 she even knocked off Gisele Bündchen as the world’s highest-paid model (a title the Brazilian had held since 2002), and she earned a tidy $30 million last year, according to Forbes.

Jenner’s latest affiliation with Tiffany & Co. is, quite suitably, the jewel in the crown of her career. She fronts the spring 2019 campaign wearing the iconic Tiffany T collection alongside five other personalities, including Carolyn Murphy, Fei Fei Sun and Imaan Hamman. “Being able to work with Tiffany is really exciting, because it’s genuinely been part of my life for so long and genuinely is stuff that I really love,” says Jenner, revealing that her first little blue box contained a necklace her mum gave her as a baby. It was also a good excuse, she jokes, to come to Australia for a day.

The day she is talking about was a recent 24-hour jaunt during which Jenner flew here to headline the opening of Tiffany & Co.’s new flagship store in Sydney. Jenner arrived flanked not only by security, but her own glam team – hair and make-up artists Jen Atkin and Mary Phillips, who boast three million Instagram followers between them. Arriving on set, she was friendly and relaxed and showed no signs of fatigue, despite only swinging by her hotel for a quick shower (and slather of La Mer face cream) after jumping off her flight. She walked around in her fluffy robe and slippers until it was time to pull on some latex and have a specialist gemologist drip her in diamonds.

Similarly, at the store opening a mere few hours after wrapping, Jenner defied all laws of jet lag and walked the red carpet wearing a pink tourmaline and sapphire butterfly necklace (it featured more than 400 pink sapphires and a cushion-cut morganite of approximately 11 carats) matched with a fun and frothy flamingo-coloured dress by French label Ingie Paris.

The Tiffany & Co. association reflects Jenner’s current standing in the fashion world – that is, at the very top. She was last in Australia with sister Kylie for the launch of their Forever New fashion line in late 2015, but it was Jenner’s first trip down under that is particularly telling. On the cusp of her 17th birthday, she flew here chaperoned by her mum and US-based Australian photographer Russell James, whom Kris enlisted to nurture her daughter’s transition from reality TV little sister to serious fashion model.

Jenner grows wide-eyed as she admits to being completely out of her depth. “I had no idea what I was doing,” she remembers. “I was kind of just winging it and I don’t think I was super-confident … I was signed to an agency in LA and I thought that it was big time and that was going to be my big break. It was only when I started shooting here in Australia with Russell that I decided I was going to go to New York.” She’d done some modelling before that, “but it was a different type … like ‘Prom’ magazine or ‘Cheerleader’ magazine”.

On the ground for five days, that trip in late 2012 coincided with Jenner shooting her first major fashion cover: Miss Vogue, the digital-only younger sister to Vogue Australia. Afterwards, James took mother and daughter to the Kimberley in Western Australia to shoot against stunning, albeit wildly remote, backdrops.

“We were sleeping in Broome and then we’d fly out on a helicopter for an hour and a half to the middle of nowhere,” recalls Jenner, almost incredulous. “We’d land on a massive rock, then get out and shoot, then get back in the helicopter and leave. Russell was my fashion dad in a way. He took me under his wing, and said I am just going to give you experience. It was a really intense way to just throw me into it. I’m in such a different place now, I get it more. [Coming back] really is a cool full circle. For sure.”

There were sceptics in the beginning who questioned whether Jenner could make it off her own back. She’d even attend castings simply as ‘K’ or ‘Kendall’ to distinguish herself from her famous family. “But I’ve always been the person to prove [critics] wrong, even when I was younger,” she says. “I’ve always been a hard worker: that’s in my blood. My parents raised me and my little sister to be that way and the rest of my sisters, too. A lot of people assumed that because I came from a ‘name’ that it was a lot easier for me to get to where I got, but actually it’s the completely opposite.”

Russell James has gone on to shoot Jenner for countless magazine covers, department store jobs and even private art projects in the US, and tells Vogue: “100 per cent of Kendall Jenner’s success is actually 100 per cent Kendall, because she is so damn motivated and disciplined in a way that people don’t get to see.

“Genetically she had everything to be a great model, but I told her it was going to be so hard to do because she already had a brand. In some ways the industry was especially harsh on her, because it’s harder to rebrand than it is to brand, so she had an incredible challenge.”

Jenner also feared being too hyped up and becoming hot one second, a fashion footnote the next. “Most of the time [this business] is all about new faces and it happens really fast. They kind of grab onto that person and then all of a sudden you take off and you’re doing a bunch of shows and you’re getting a bunch of jobs,” she says. “So for me it was that initial two to three seasons where I was like: ‘Oh wow, people are feeling me’, but my goal with everything is always longevity. In this industry specifically, it can be really challenging to maintain, so it’s always a work in progress.”

She says it’s something she’s still managing, especially since it’s hard to reach the top but even harder to stay there. But apart from appearing on Keeping Up With The Kardashians, she has no plans to expand her career beyond modelling. “I am still so young,” she says. “People are always asking me: ‘What’s next? What’s next?’ I’m like: ‘Why do I have to have it all figured out right now?’ Most people my age don’t have it figured out as much as I do.”

Navigating her way, on her own terms, is an approach that has spilled over into Jenner’s personal life. She is dating Australian-born basketballer Ben Simmons, also 23, and although the pair do not talk openly about their relationship, they are clearly smitten. Jenner revealed on The Ellen DeGeneres Show in February that they’d been dating “for a bit now” and on the day of Vogue’s shoot she streamed Simmons’s game for the Philadelphia 76ers while she was in hair and make-up. Later, she Face-timed Simmons, cheekily holding up the March/April issue of GQ Australia that had him on the cover.

Having seen her half-sisters Kim, Kourtney and Khloé Kardashian deal with the scrutiny that comes from having your love life paraded as public fodder, Jenner has chosen to remain schtum.

“I got a glimpse of how my sisters dealt with [the attention] and it’s cool to learn from that. For me, a lot of things are very special and very sacred, like my friends and relationships, and I personally think that bringing things into the public makes everything so much messier.

“Also I’m very young and right now I feel like relationships aren’t always super-certain and I don’t want to bring too much attention to something if you don’t really know long term [what it’s going to be]. A relationship is only meant to be between two people, and the second you make it the world’s business is when it starts messing with the two people mentally. Like once everyone is let in, you’re letting all these opinions into your relationships, and I don’t think that’s fair.”

Jenner says she is content staying on her current path and doesn’t want to force things or put pressure on herself to tick off boxes by a certain age. “I feel like once you do [that], it’s just completely ingenuine and you think that you have to be in a certain place when you don’t have to be. Everyone has their own path and their own way of letting the cards fall. Your 20s are for messing up and figuring it out.”

As for the cheeky suggestion that one day she’ll be able to combine work and love with a Tiffany & Co. engagement ring, Jenner just laughs. “Maybe. Definitely not now, but maybe one day.” For the moment she’s happy doing her own thing in her own time.

This article will appear in Vogue Australia’s June 2019 issue, on sale Monday, May 27. 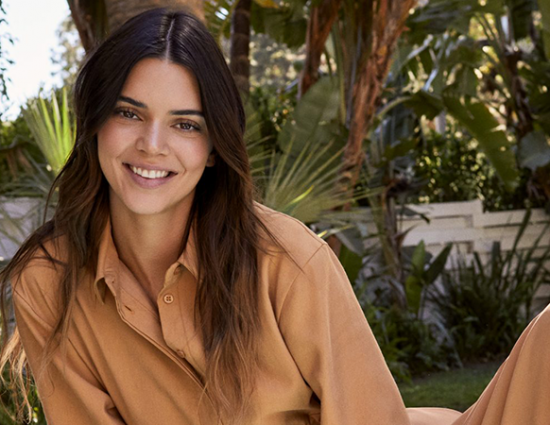 Kendall Jenner for ‘About You’ Campaign 2021